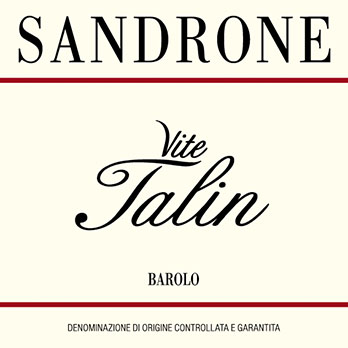 Time: a friend, an ally, a giver of value.

The 2013 Vite Talin is a classic vintage, reflecting the regular course of the seasons that shaped its character. It seems to be sprung from old tales of tradition, different as it is from what we today consider commonplace.

The 2013 Vite Talin carries within it all the positive effects of weather conditions which according to the Sandrone style, may be qualified as perfect. The vine confirms all its distinctive features analysed in the previous years: less lush both in terms of its appearance and fruit production, it presents fewer leaves that are thick and rough to the touch. Accordingly, its clusters are sparser, with smaller, intensely coloured berries.

During the course of the 2013 growing season the winemaker’s task was to aid the vine in its development. Throughout each phase, we supported the natural balance of the plants by tending to their needs and supplementing them with nutrients and care.

2013 followed its own leisurely rhythm. The budding occurred in late April at the normal time, while the flowers only appeared in the second half of June, 15 days later compared to the seasonal average of recent years. The harvest took place in the middle of autumn towards the end of October, when stark differences between night and day time temperatures created the perfect conditions.

Ratings for the vintage 2013

The wine. The inaugural vintage of Vite Talin is a dense, brooding wine that recalls Baroli of 50 years ago, when they typically needed a minimum of 20 years to come out of the “closed” period. But this is not a nostalgic wine; it shows all the patient craftsmanship and gem-like transparency typical of Luciano Sandrone, who spent 25years developing the vinification methods necessary for this unique nebbiolo to show itself at its best. The nose exhibits deep black fruits, especially black cherries and black raspberries, with powerful licorice, cola nut and violet notes. On the palate, the forbidding structure of the Vite Talin is at the front - the small berries contain a juice-to-skin ratio that results in this type of naturally highly tannic wine. Though it has a great structure, but still remains light on its feet - the tannins are fully ripe, the alcohol and extraction are balanced and the acidity keeps the freshness intact. Like in the old days, the patient collector will be rewarded after 20+ years of cellaring, but this wine has the trademark Sandrone polish and is immaculately clean. The finish seems to linger forever, with a sapidity and minerality that engages the mind as well as the senses. Best between 25-50 years of age.

The 2013 Barolo Vite Talin today has a more ‘rustic’ feel to it, which will evolve and transform itself as time goes by. And surely, this wine can be relied on to work its magic, year after year, after year. Decidedly born to last, it has its own spellbinding story to tell.