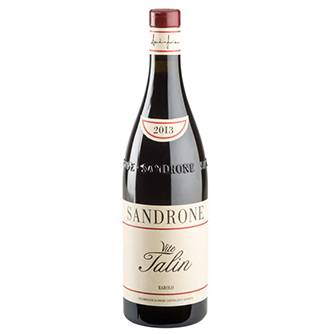 THE HUMILITY OF THE WINEMAKER.
THE RESPECT FOR DIVERSITY.

We are pleased to announce the first release of Vite Talin, the new Barolo from the Sandrone family, in which the grape shines more brightly …

THE HUMILITY OF THE WINEMAKER.
THE RESPECT FOR DIVERSITY.

We are pleased to announce the first release of Vite Talin, the new Barolo from the Sandrone family, in which the grape shines more brightly than the terroir.

BAROLO – It took 25 years of experiments, trials and valuations. In 2019, after 6 years of ageing, the first bottle of 2013 Barolo Vite Talin will be released. This is a wine destined to be as imagined by Luciano all those years ago.

A combination of enthusiasm, curiosity, stubbornness and dedication. The history of Vite Talin is wrapped up between Luciano Sandrone, who in 1987 was a young, curious and ambitious winemaker of great potential, and the trust of an old grower, Natale Ronanza, nicknamed "Talin," who agreed to rent his vineyard in Le Coste di Barolo to Luciano.

And it was in this very piece of land that Luciano, working in the vines, noticed a plant of particular and unique character: sparse and scraggly bunches with smaller-than-normal berries, of a deep blue color, vegetation of decidedly less vigor and jagged, thick leaves. Instead of uprooting the plant, Luciano noted its position so as to observe it carefully and each subsequent year it exhibited the same characteristics.

Luciano then entered into an experimental phase: micro-vinifications confirm good color, excellent tannins and balanced alcohol. From the late 1980's to the early 1990's, the plant is reproduced by field-grafting that confirms the plant's unique set of characteristics as repeatable from site to site and continued experiments in the winery show results well above the average. Luciano also began a collaboration with Prof. Anna Schneider, an ampelographer at the National Research Institute for the Improvement of the Vine at the University in Torino.

Luciano Sandrone: "This wine expresses the result of a path taken to protect and cherish that which Mother Nature has given us. It could not have been other than Vite Talin: "vite" in honor of the single unique plant and "Talin" to honor the elder farmer who showed great faith in my potential all those years ago and believed in my ability to astonish him. I gathered the fruit of the earth, and I cultivated an opportunity. Nebbiolo is my life and my life's work."

Only in 2017, thanks to DNA analysis, was it conclusively determined that the vine was Nebbiolo of the highest qualitative characteristics. For this plant, with its unique characteristics, and for this future Barolo, the path was now clear, after 25 years of work. The vintage 2013, after 3 years in tonneaux and then botte, and a further 3 years of refinement in bottle, has continued its steady evolution. Today, in 2019, Vite Talin is finally ready.

VITE TALIN, the Birth of a Barolo.

The wine is vinified in a large open-topped wooden vat, then matured two years in tonneaux of French oak followed by a year in large casks before being held in bottle for an additional 3 years. Vite Talin is a precious, rich wine, suited to long cellaring, with an intense and impeccable garnet-red colour, of varied and full aromatics which at the moment are predominantly floral and fruity, and with hints of emerging spice notes. The wine is structured and powerful with significant tannins, which promise great potential for long cellaring.

• Barolo DOCG
• Nebbiolo 100%
• Complete destemming
• Warm pre-fermentation maceration under anaerobic conditions
• Indigenous yeasts only
• Fermentation in 50hl upright wooden casks
• 20-25 days of total maceration, depending on the vintage's specifics, with use of submerged cap when merited
• After the maceration, the first racking is to separate the wine from the grape solids. The wine is racked to steel for 1 week for the rough lees to settle out
• Then, the wine is racked to French oak tonneaux – 500L – for malolactic fermentation and 2 years of ageing
• Over 50% of the tonneaux are new, as the wine's tannin structure requires more new wood
• Racked to large oval casks of French Oak of for 1 year of refinement
• Bottled after 3 years total in wood
• Held in bottle for 3 years before potential release

50+ harvests, more than 40 years of wine making, 3 varietals: Nebbiolo, Barbera and Dolcetto. 2 territories together as Langa and Roero tell the story of our 6 red wines, which are expressions of our intuitions, careful observations and critical thinking.

We have always been driven by a single overriding and thriving ambition: to discover new nuances in each harvest. Revealing them in our wines is what we want and love to do! Each harvest has its own harmony, and each wine is a story in itself. 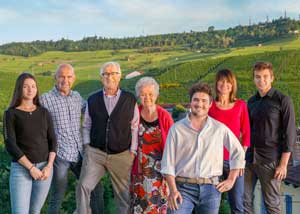