Vite Talin is a wine born through the careful custody and protection of nature's true and vital expression. Luciano is a curious man, receptive to miracles and surprises, loyal to his land but above all humble and thus patient. A tireless observer, an unstoppable experimenter, an attentive and courageous defender, Luciano probes and interrogates Mother Nature, then accepts, treasures and cultivates her gifts. 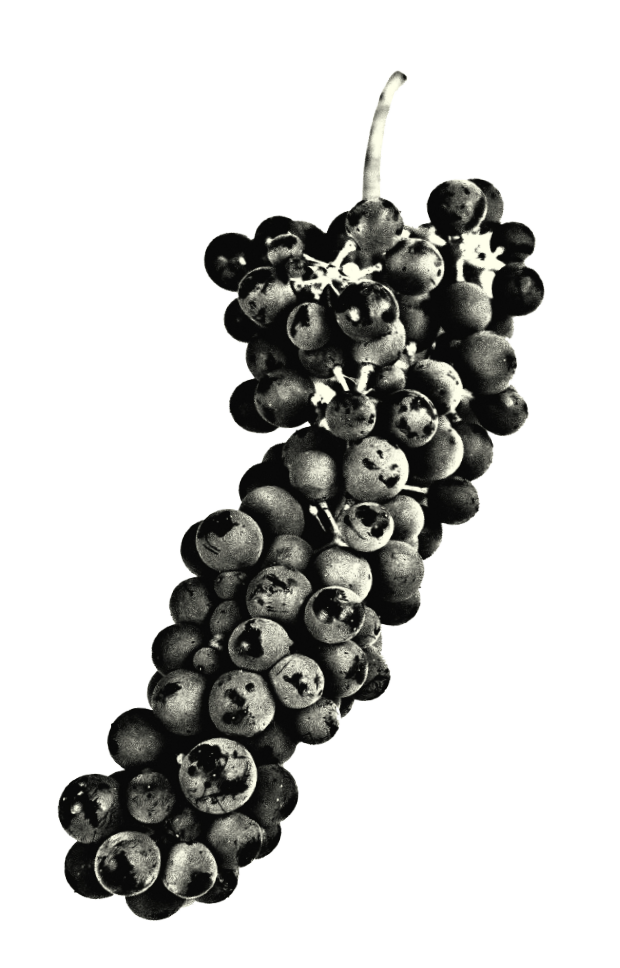 In 1987 a single old, gnarly Nebbiolo vineyard facing the castle of Barolo gave Luciano its rst fruit. e parcel had a long history: an old farmer and landowner named Natale - nicknamed "Talin" – who, a er years of heartfelt work and tireless cultivation, rented his plot to Luciano. An act of faith to a young and curious winemaker, worthy and capable of following in his footsteps. Both of these men are old souls, separated only by a generation. In his constant quest to improve the quality of his vineyards, Luciano let himself be surprised. Among the rows, he noticed a vine of particular character, on whose shoots had grown small and scraggly bunches, with individual grapes much smaller than usual, and of a deep dark bluish plum colour. Di erences need not always frighten, and this plant possessed unique characteristics: a compact vegetation of lower vigour, thick and jagged leaves, a moderate production of both grapes and bunches that were smaller than usual. Traits, however, that would remain stable over time and seasons. Luciano marked the plant, so he could continue to observe it.

Wonder originates in the new. Believing in the new represents an opportunity. At the time, the tendency of grape-growers was to have a homogenous vineyard to improve the quality and consistency of agriculture. nInstead of uprooting the plant, in 1988 Luciano decided to study it. Morphologically, the plant resembled Nebbiolo, but even from the rst buds the plant showed a sparse vegetation, irregular growth patterns, and the same magically small berries and bunches. e personality and uniqueness of the plant raised far more questions than answers. So, Luciano began a series of trials. He harvested the few grapes produced by the single plant, and with a microvini cation he began to understand the potential inherent in those di erences: great extract and excellent acid balance, which gave him the will to keep moving forward. A collaborative e ort began with Professor Anna Schneider, a researcher and ampelographer at the Centre for the Genetic Improvement of the Vine at the University of Turin. She and her team con rmed that the plant was morphologically a cultivar of Nebbiolo, with the presence of viruses that are also frequent in the sub-variety Michet. At the time, a most precise analysis of DNA couldn't be performed given the lack of reliable methods when testing vines. Something di erent does not necessarily require a correction. Luciano believed in the plant and chose to cultivate it. is isn't simple – it must be reproduced ! More plants are required to give coherent, reliable, repeatable and technically signi cant results. Using what is now considered a rare technique of gra ing in the eld, Luciano establishes a few hundred plants in each of two small isolated parcels. e parcels were modest: it is the Piedmontese way to take "small steps at a time". us, with time and patience, something signi cant can be achieved. All of these new plants were o spring of the original plant and a er three to four years Luciano could con rm that the vini cation result was the same as of the original one.

Since 1991, year a er year, with care and dedication in both the vineyards and the winery, the resulting wines showed constant results, endowed with a signi cant structure greater than average. erefore, while both the plants continued to grow in the vineyards and the vini cation experiments proceeded in the cellars of the winery, Professor Schneider's research-team made DNA analysis available and studies on this special plant continued.

DNA techniques and practices of research evolved and reliable results were nally available in 2017: it is a Nebbiolo vine with the highest qualitative characte- ristics. It was everything Luciano had always believed. e path of this special plant and of this potential Barolo had always been clear to Luciano, and the 2013 vintage, having already matured in wood for 3 years, rst in tonneaux and then large casks , was bottled in the early Springtime of 2017 and continue to evolve.

Vite Talin, the birth of a Barolo

It required 25 years of experiments, tests and critical evaluations. In 2019 the rst bottle of Barolo Vite Talin 2013 vintage will emerge from the Sandrone winery a er 6 years of evolution and re nement. is wine was born and destined to be the one as imagined by Luciano. "Vite" is the Italian word for vine and it has given in honour of the singular and unique vine and "Talin" to celebrate the elderly owner of the vineyard, the same Talin who believed in the ability, patience and humble winemaking skills of the young Luciano. e wine is vini ed in a large open-topped wooden vat, then matured two years in tonneaux of French oak followed by a year in large casks before being held in bottle for an additional 3 years. Vite Talin is a precious, rich wine, suited to long cellaring, with an intense and impeccable garnet-red colour, of varied and full aromatics which at the moment are predominantly oral and fruity, and with hints of emerging spice notes. e wine is structured and powerful with signi cant tannins, which promise great potential for long cellaring. e label also highlights the speci c and unique character of Vite Talin: a wine in which the grape's unique character is more intense than the terroir. 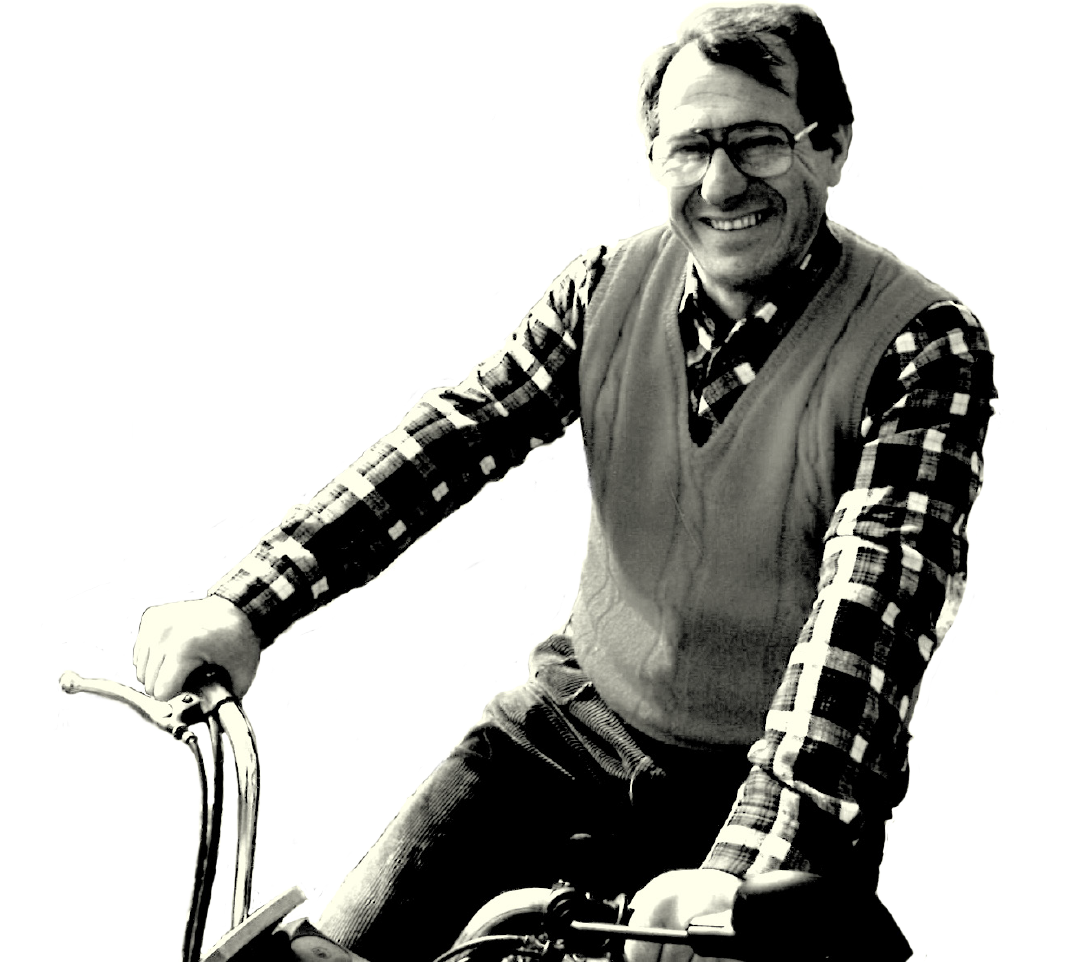 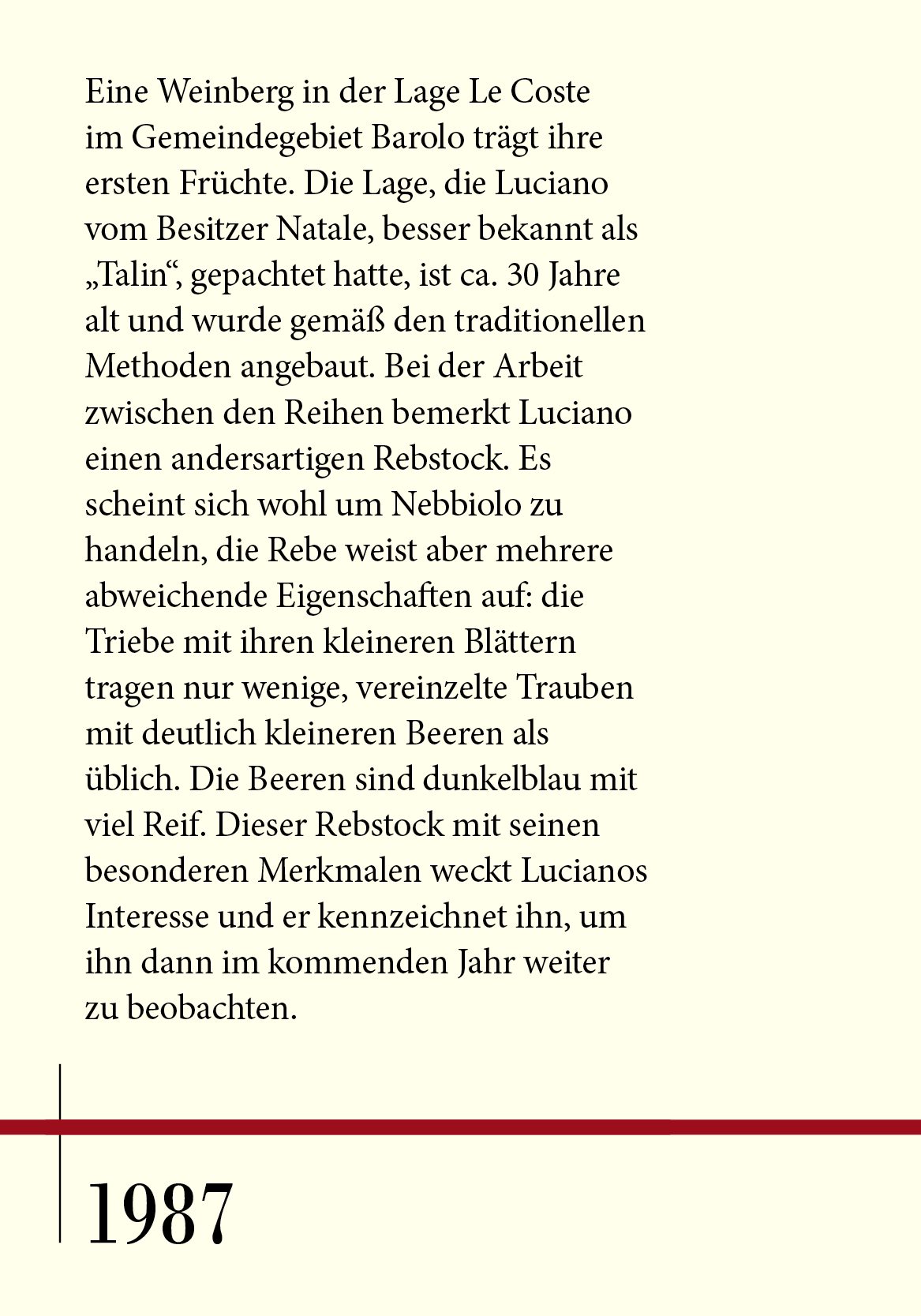 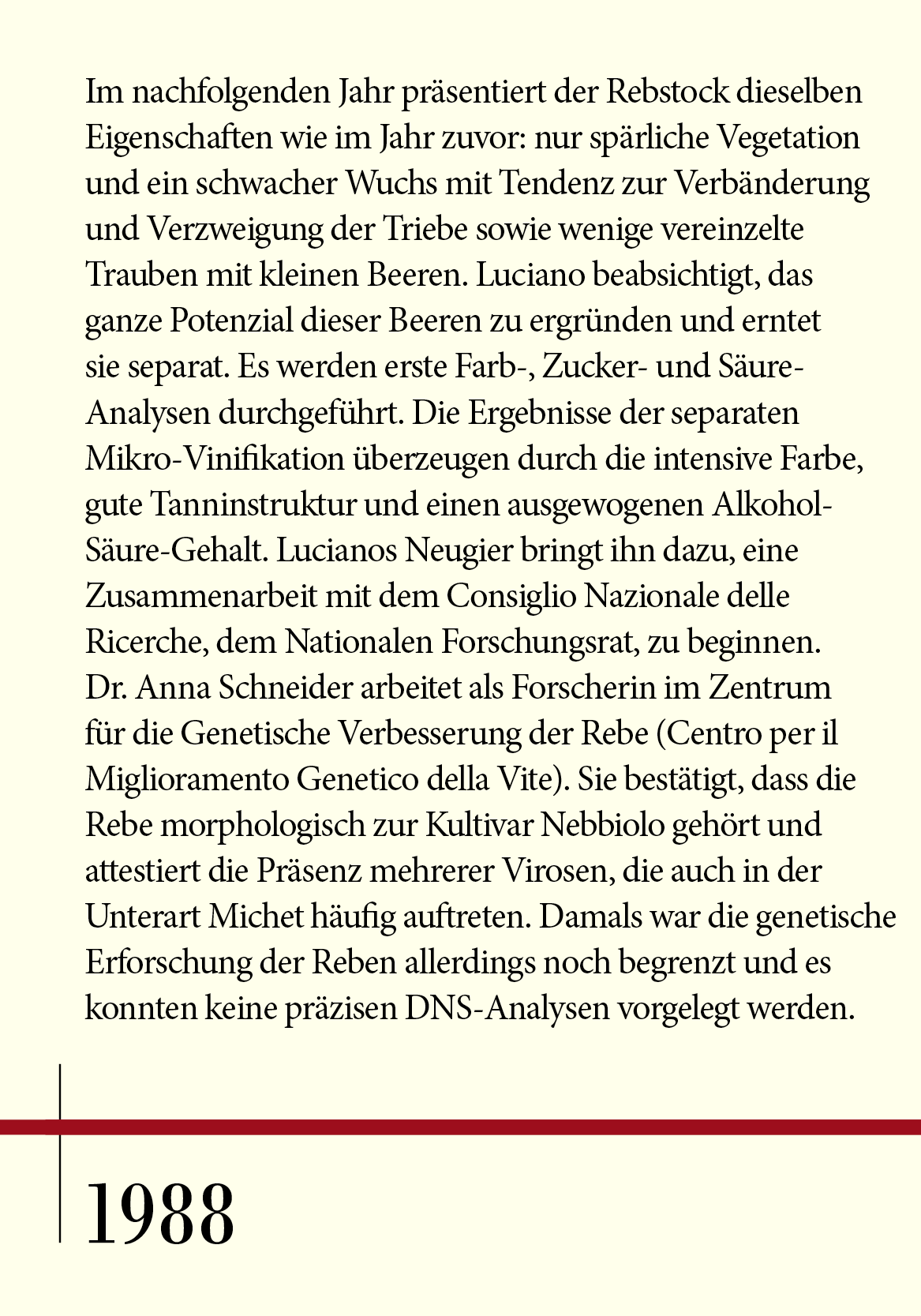 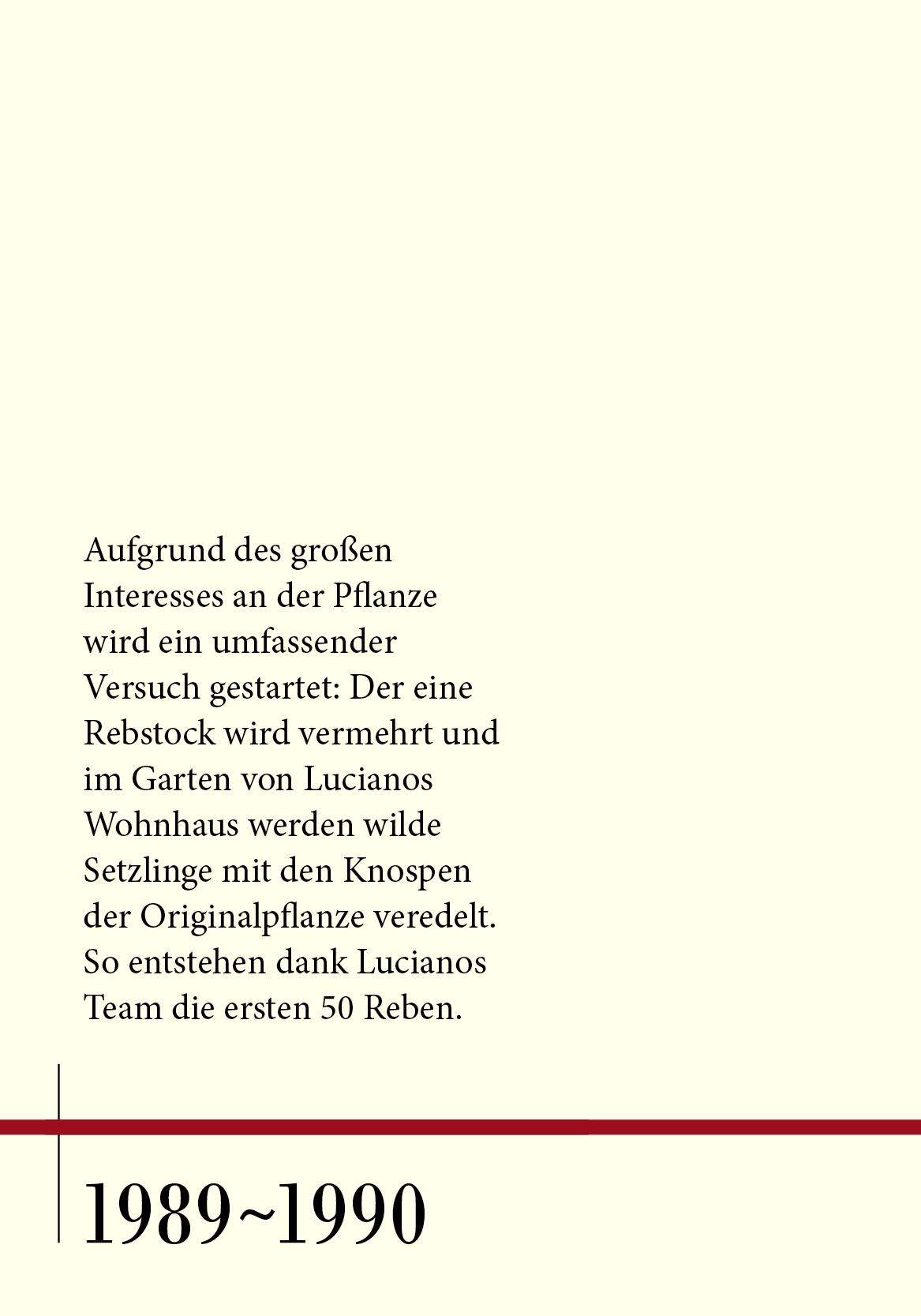 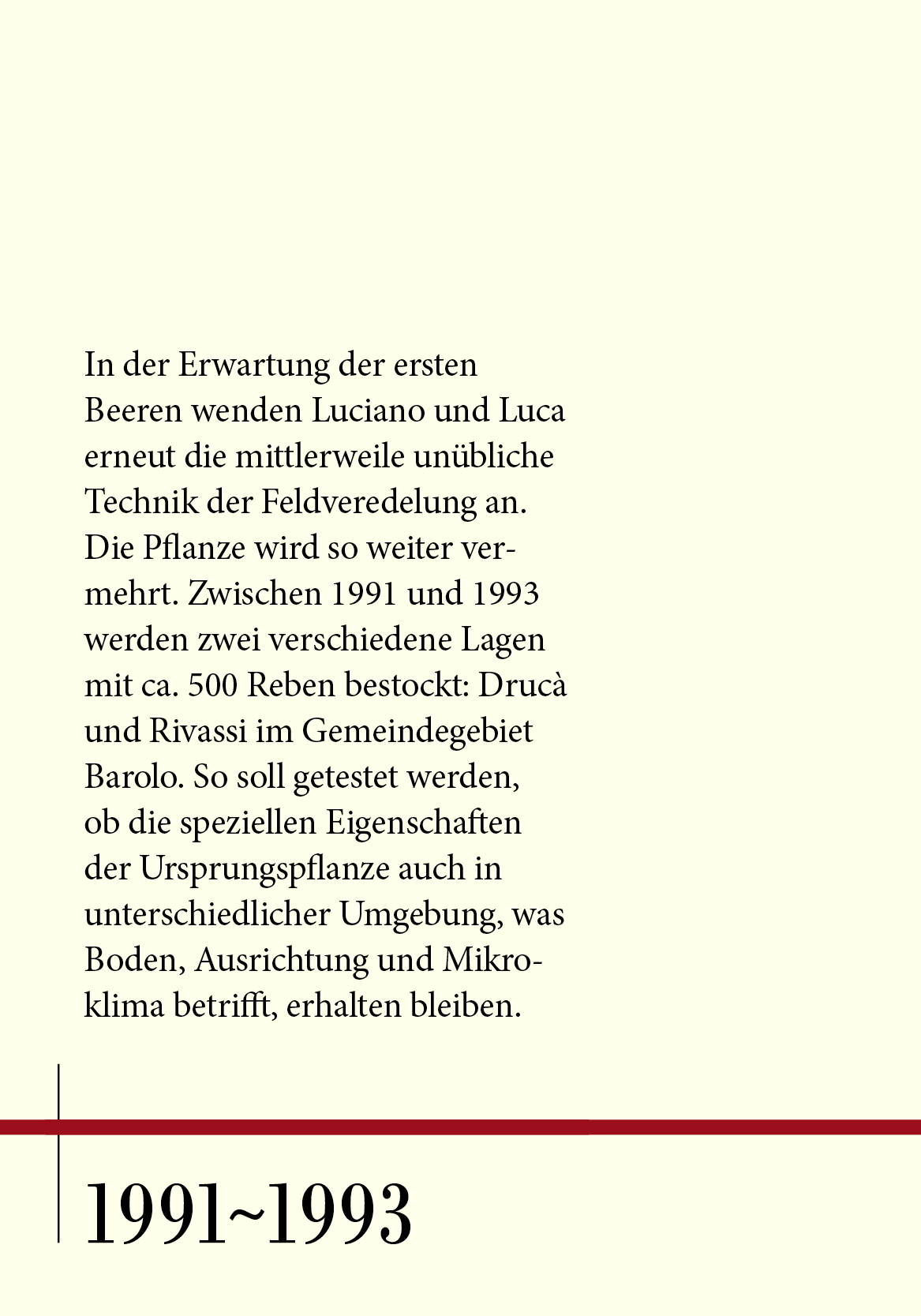 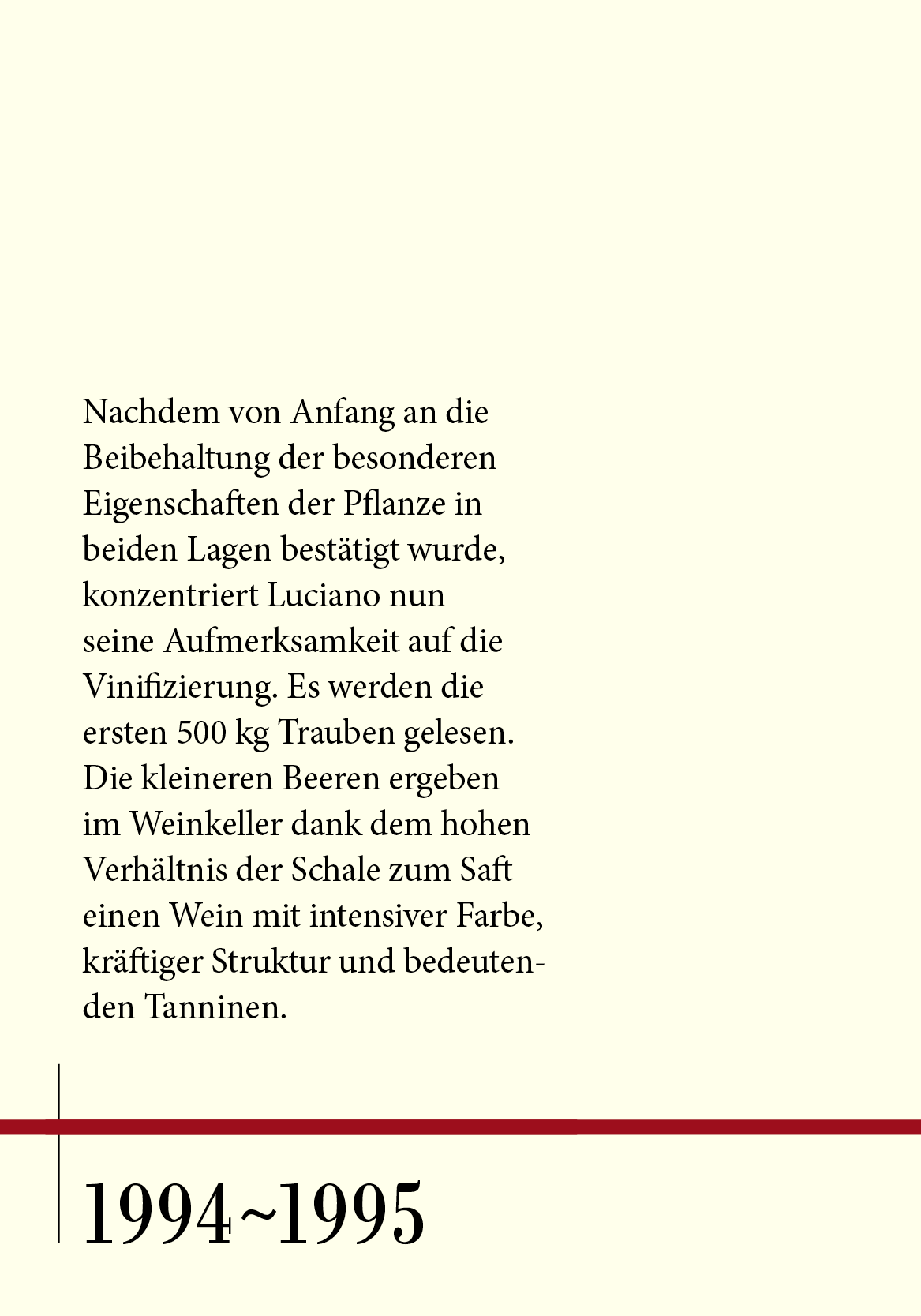 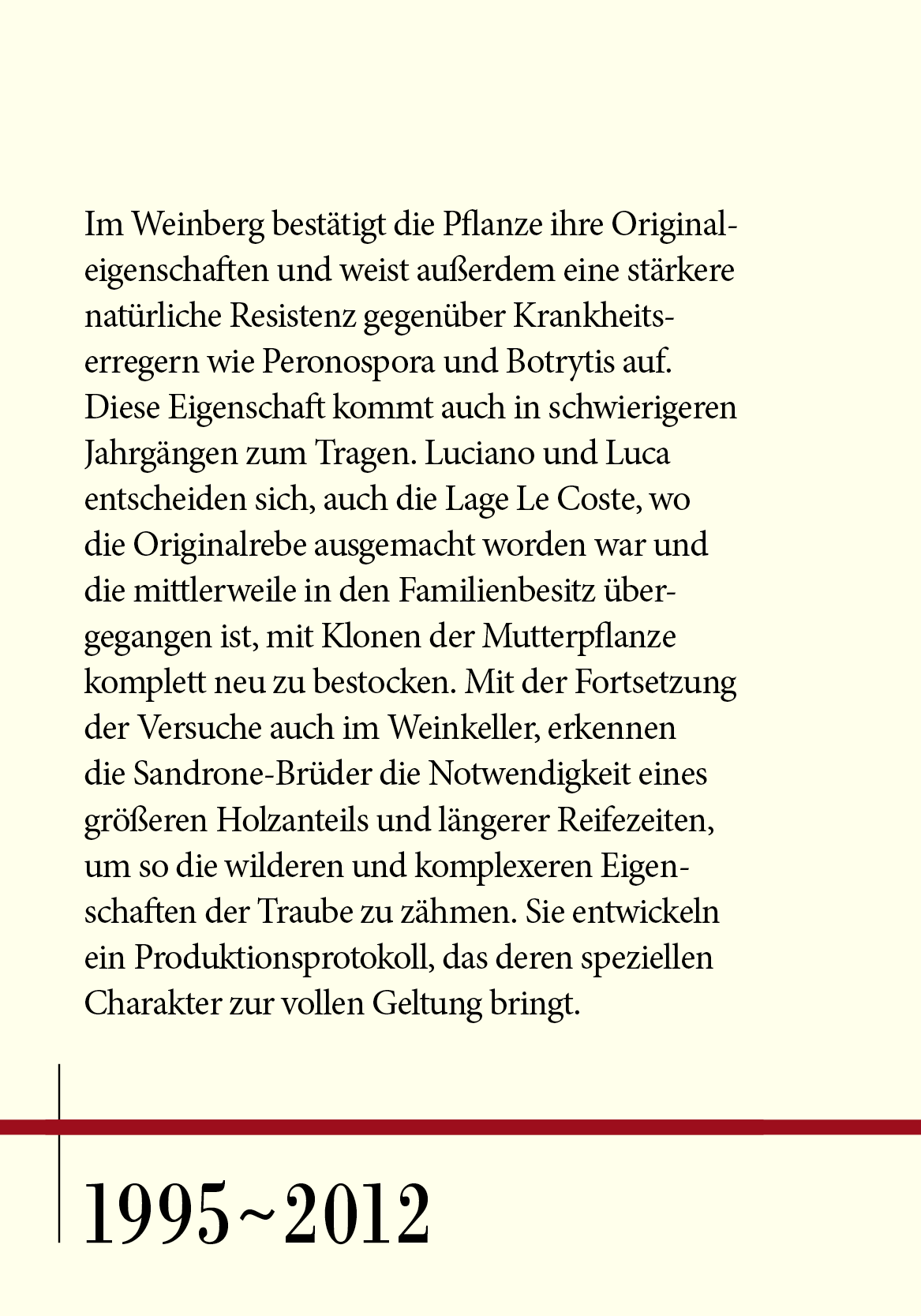 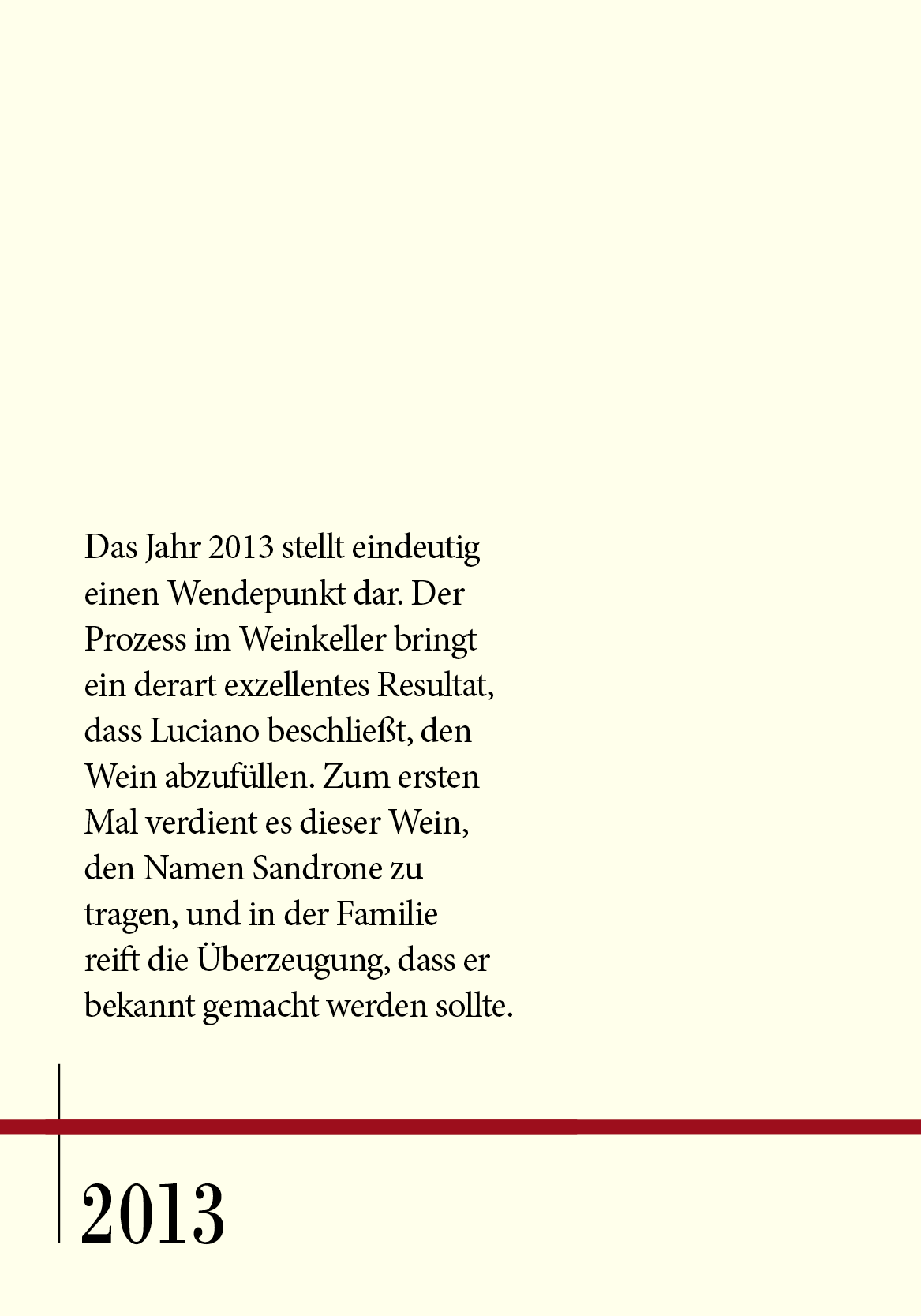 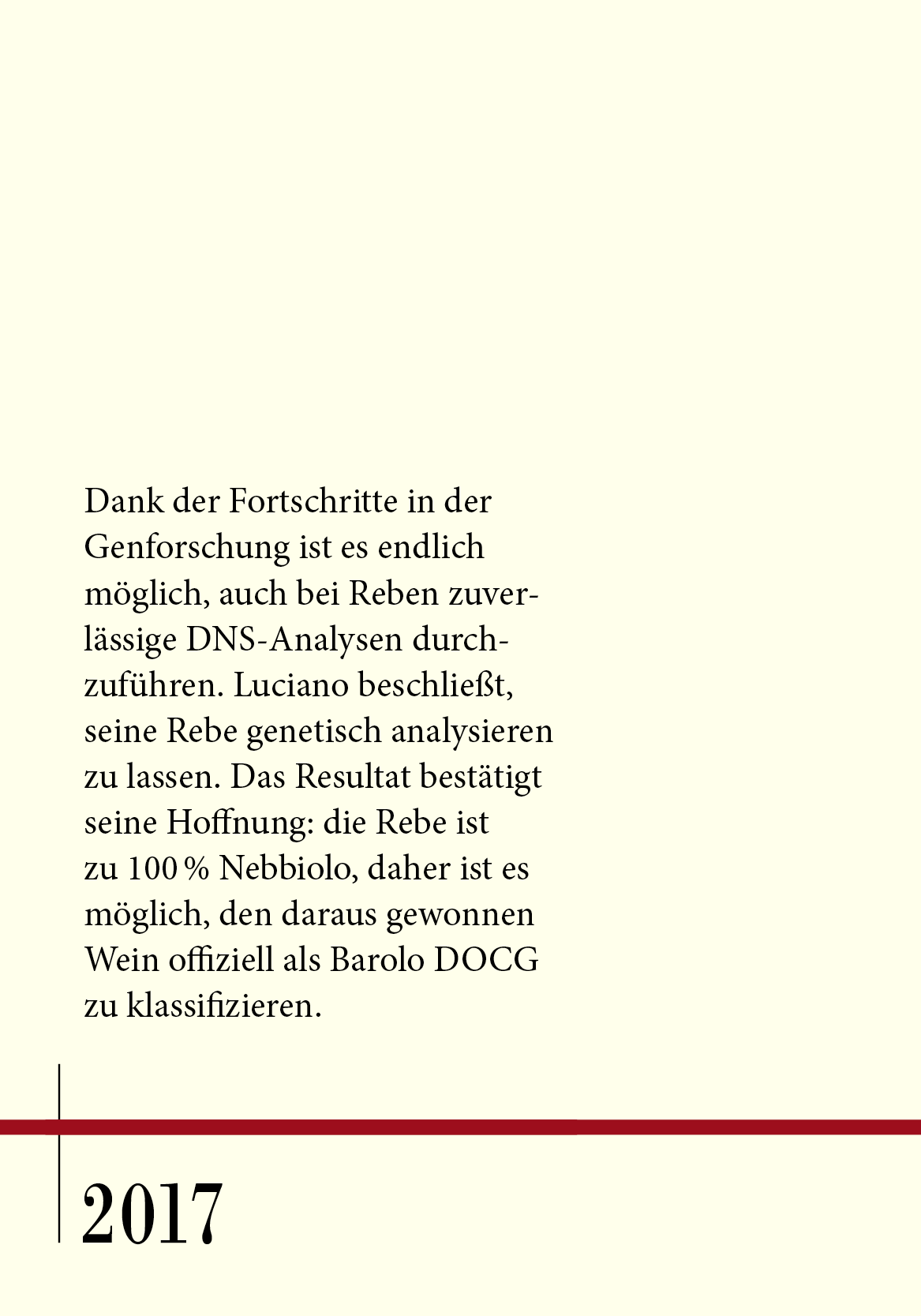 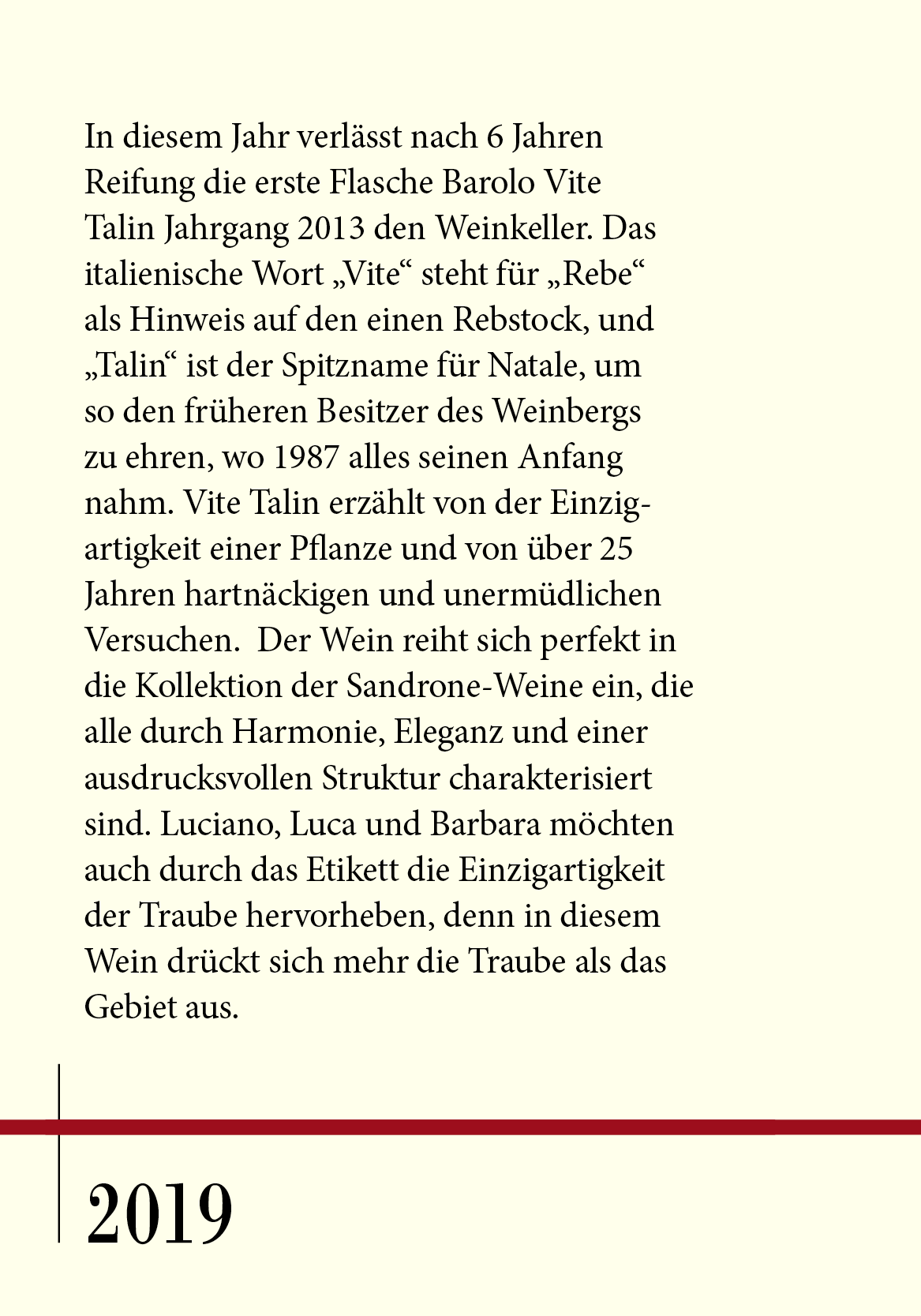 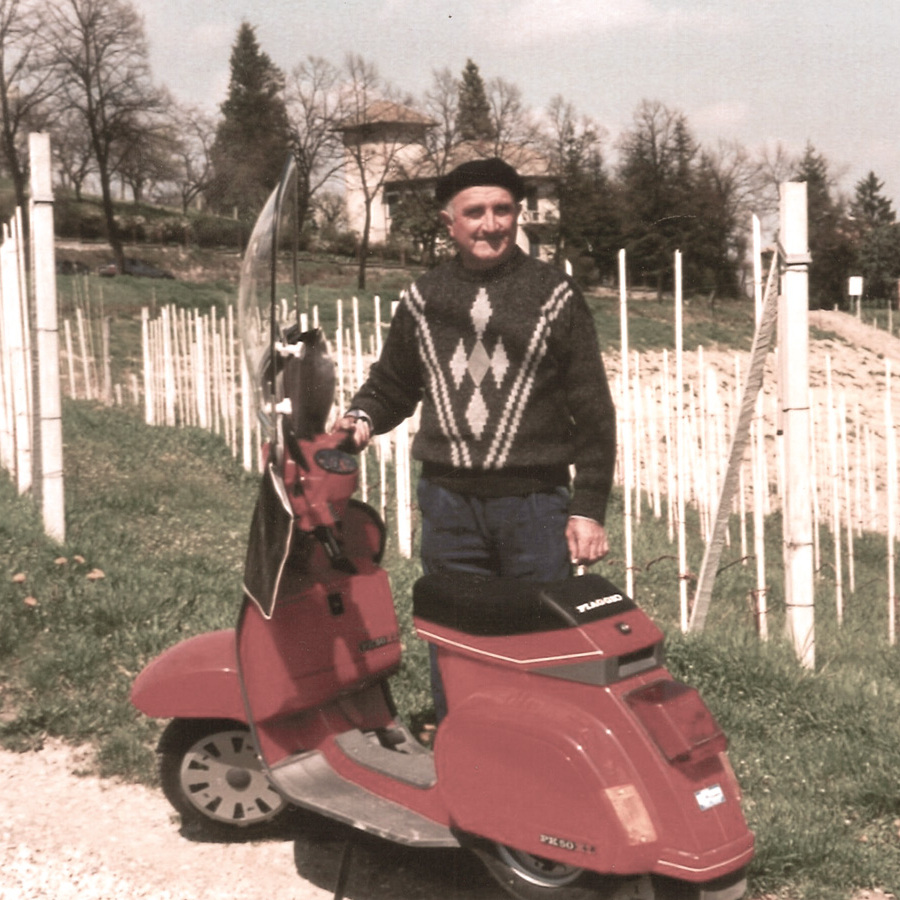 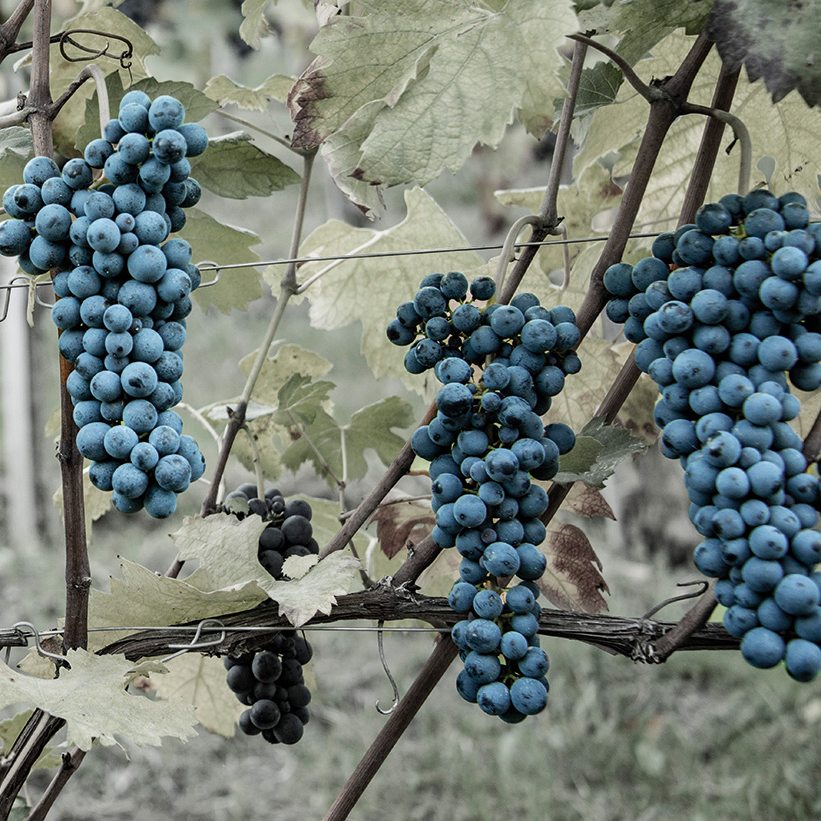 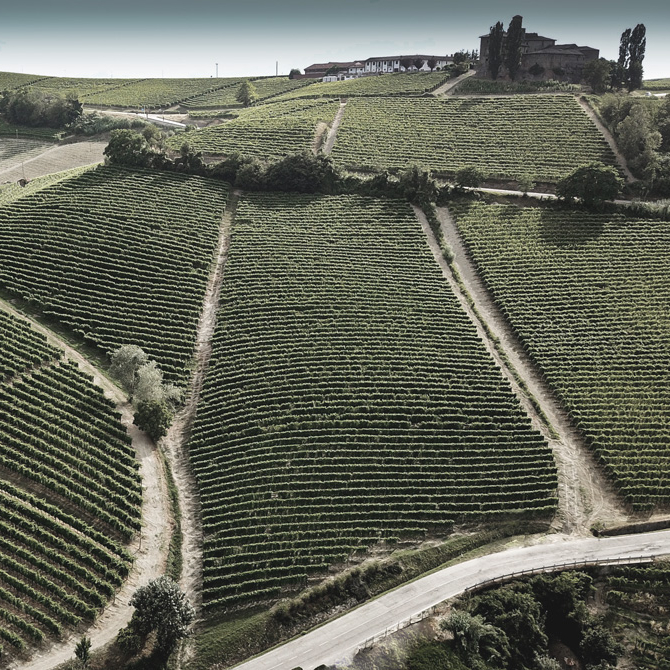